Skies were blue and temperatures soared but gentle breezes made for more comfortable conditions on the warm days of July 26, 27 & 28 when all three district Soil and Crop Improvement Associations (Thunder Bay, Rainy River and Kenora/Dryden, respectively) held their annual local crop tours.

For Thunder Bay Soil and Crop Improvement Association’s (TBSCIA) tour, the day started off meeting at Thunder Bay Agricultural Research Station (TBARS) for 10:00am, where approximately 40+ visitors were in attendance, 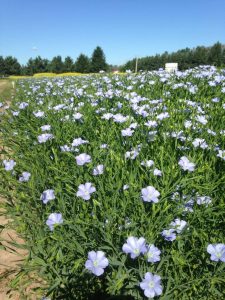 eager to see what Dr. Tarlok Singh Sahota, Director of Research and Business, and TBARS staff Blaine Tomeck, Ag. Research Technician, and Muhammad Usman, Agricultural Research and Extension Intern, had been up to for the 2017 growing season. Dr. Sahota proceeded with an in-depth tour of the station’s many diverse plots, including various trials on crops such as canola, alfalfa, various varieties of wheat, edible beans, flax, and newly-introduced galega, plus many more crop varieties. The large acreage and beautiful sunny location proved, as always, an exceptional area to view the crops at and spend the morning learning more about the field trials that our local research station has been working hard on in the past few months. A special thank you to Dr. Sahota and the staff for once again hosting a great open house and starting location for the TBSCIA crop tour.

After heading back to the station from the fields, visitors were treated to a refreshing lunch, generously sponsored through Masterfeeds. We had a brief but informative speech from Andrea Habinski, Cloverbelt Local Food Co-op’s Sioux Lookout Community Co-ordinator on their recently introduced new funding program, Sustainable New Agri-Food Products and Productivity (SNAPP) Program. SNAPP supports Northern Ontario agriculture and food producers, businesses, collaborations, communities and First Nations to create new products, enhance abilities for season extension, scale up production or enhance productivity (see more on this program in the article on page 14).  We also had the chance to hear from a few representatives from James Richardson International Limited, as well as the opportunity to meet OMAFRA’s Edible Bean and Canola Specialist, Meghan Moran, who joined in on all three crop tours. 2 representatives from Canada Malting as well as Gene Kent from the Lakehead Region Conservation Authority were also special guests that were present throughout the day.

The afternoon left interested viewers with a chance to visit the cattle crossing at Jack Hansen’s farm down Blake Scoble Road, a field in full bloom of canola owned by Fritz Jaspers, and a glance at a galega field belonging to Martin Schep. A productive and exciting day to be sure.

Day two of the district tours took place with an early start in Rainy River, 10:00am to be exact, at the Emo Agricultural

Research Station (EARS), where approx. 25+ gathered to follow for an agricultural tour of the area in these parts, hosted by the Rainy River Soil and Crop Improvement Association (RRSCIA). After a brief mix and mingle, the group headed out to tour a number if different crops including sunflowers, oats/peas haylage, soybeans, canola and corn. A refreshing break was taken during lunch hour at the Moreley Park. That evening, EARS also hosted a fun-filled and informative open house, with an attendance of about 50 people, and included what they’ve been up to for the 2017 growing season thus far. A special thank you to Kim Jo Bliss, Research Technician, and the rest of the staff at EARS, plus the directors and President John Sawatzky of RRSCIA, who hosted another fabulous event in the Rainy River district. (See EARS article on page 10 for more details on the tour!)

The third and final crop tour set place north of the Rainy River area, but was just as much of a success nonetheless. The Oxdrift Hall set the location for the start of the Kenora District Soil and Crop Improvement Association’s (KDSCIA) tour, which kicked-off at 5:00pm on July 28, with a delicious and well-organized BBQ dinner. Special thanks to Marj Larson, Secretary KDSCIA, and her assistant Lucy, plus the directors and President Martin Sherwood of KDSCIA, for the organization of the BBQ. After bellies were filled, participants were eager to load a local school bus and be on their way for a countryside tour of the area. The first stop was the nearby property of Ken Lovenuk, who explained his practices of rotational grazing. After a quick look at the local Griffiths Abattoir, the bus rolled on through back country to the property of David Reiner, this area’s largest plot to date to try a newly-introduced crop of galega, underseeded in a field of oats and approximately 20 acres in dimension. The fourth and fifth stop gave participants the opportunity to view the 20 acre market gardens of Bob and Tim Wall, who are actively involved in CSA (Community Supported Agriculture) and also make an appearance with their produce at the local Cloverbelt Farmers Market every Saturday morning. The garden lays on an incredibly fertile piece of land due to the large amount of  hog manure that they apply to the soil annually. It is also the site of what used to be a peat moss bog. From there the bus rolled on past their own hog operation, and also made a stop along their crop of oats/barley underseeded with sweet clover, which they’ll combine and use for hog feed this fall. The remainder of the tour took us northeast/northwest of Oxdrift/Dryden, and eventually circled around back towards the hall.

Following the tour, and just as the sun went under, OMAFRA’s Meghan Moran gave an informative presentation on edible beans and the challenges, expectations and rewards of growing these in a northern setting. A special thanks to Meghan for the expertise she provided during all three tours in her knowledge of edible beans and canola.
This year’s crop tour through the Kenora/Dyden district proved to be a special one, as NWOSCIA was provided with funding for the opportunity to organize a vehicle from both Thunder Bay and Rainy River district to transport interested participants to take part in the tour. The funding received meant that both mileage and accommodation of out-of-town NWOSCIA members was covered.

Thank you to ALL who helped organize and take on responsibilities to make the 2017 district crop tours and open houses a success! Special thanks to our sponsors and guest speakers from both near and far, as well as those who took the time to come in and take part in the tours from out of town. Every year of the tours proves to be unique, and there is always new knowledge to garner from these long-standing annual events.

A note from Dr. Tarlok Sahota, TBARS:
A complete list of experiments in each Range was shared with the participants of the TBARS Annual Summer Tour; attended by over 40 people. Prominent personalities other than farmers were Lew Christopher, Gautam Das (with his kids Triman and Trisha) and Jonas Valiunas from Lakehead University, Kendal Donahue and Meghan Moran OMAFRA, Darren Fisk Thunder Bay Co-op, Gene Kent Lakehead Region Conservation Authority, Two of our Past Technicians (Karen Davies and Harjit Dhillon) Amy Bumbacco Food Strategy Coordinator, Andrea Habinski Agricultural Coordinator Intern from Cloverbelt, Sarah and Ray Brubacher from Massey, Richard Trivers and Murray Emke from Agricorp, Paul Tulonen IRAP, Gerry Heinrichs, Jim Doggett, John Prodaniuk, James Borgford and Taylor Bestvater Richardson International (Prodaniuk is from Manitoba) and Robert Chappell (Director of grain procurement) and Fang So (Quality Manager) CMC. One of my sons, Komal (Jaspreet Singh) Sahota came from BC to join us on the tour. Rudy Buitenhuis Past ADA OMAFRA Thunder Bay too was there!